Christmas has come early as new restaurants open ahead of the holidays, other establishments do a doubling act and lovemark locales reopen. 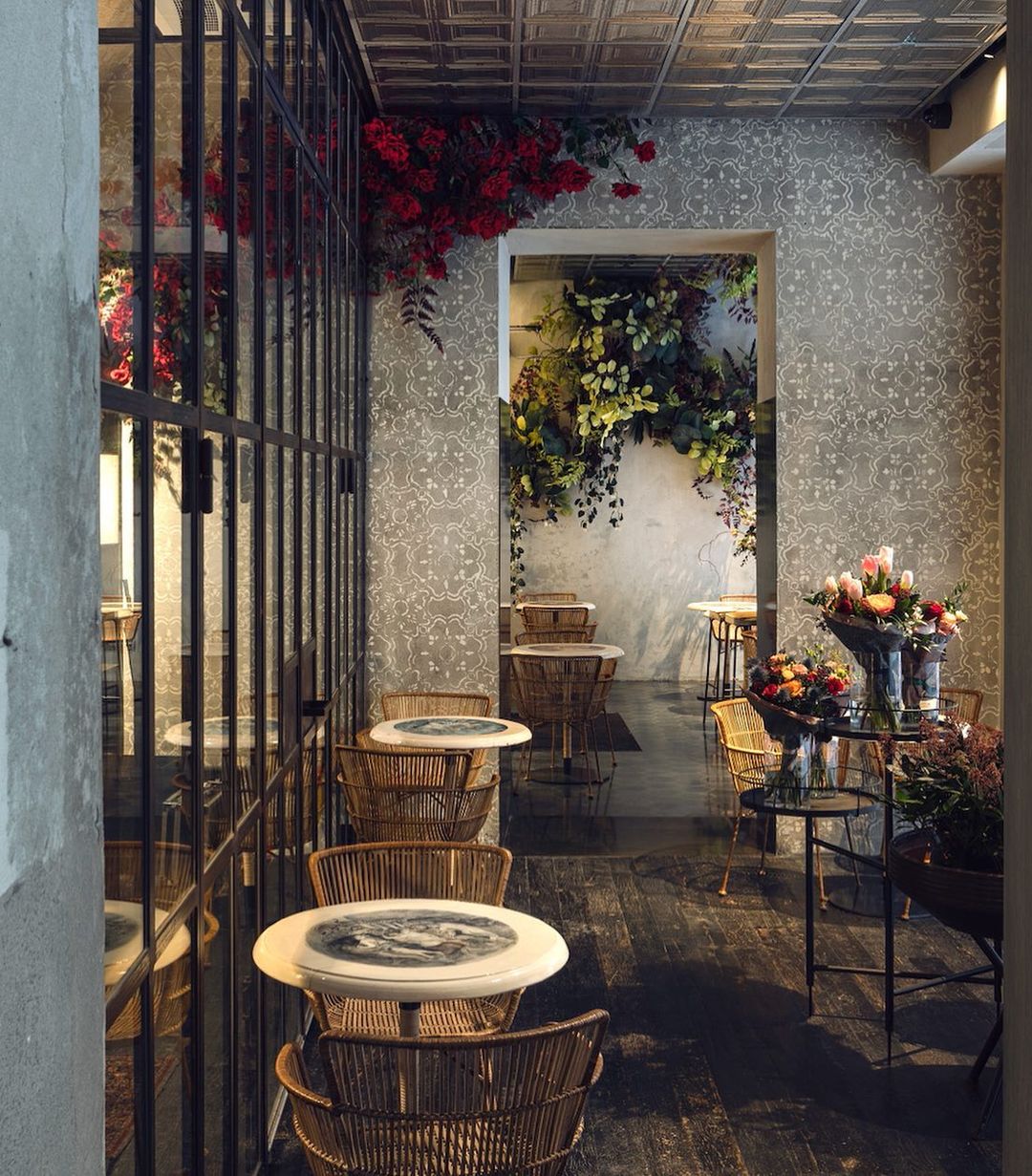 If there were a prize for the sexiest locale in Florence, La Ménagère (via de’ Ginori 8R) would likely win it hands down… and in a bathrobe. Having closed for several months for a reinvestment and makeover, the classy joint was packed as soon as the weighty industrial-style door reopened. (Seriously, a bouncer was managing the queue the first Sunday.) A bowl of spaghetti with a dusting of bottarga might set you back 18 euro, but this is The Place To Be Seen as the design conscious and Florentines with sprezzatura while away hours in a medley of alluring corners, from the dimly lit games room to the extra-long table and plush bar-side banquettes. Service can be slow and inattentive, but all is forgiven due to the slow jazz in the background, the enticing coffee-table books lining the shelves and the soft scent of the in-house florist. What it boils down to is that this San Lorenzo haunt is more of an experience than a restaurant, whose beauty and boundary breaking have been praised by practically every architecture and travel publication. La Ménagère is now being run personally by the Manfredi family, who have owned it since the beginning, and Luca Cinalli is shaking up the eclectic drinks at the stylish wooden and marble bar. Brunch, afternoon tea, aperitivos or dinnertime, this siren will lure you back time and time again for its singular aesthetic. 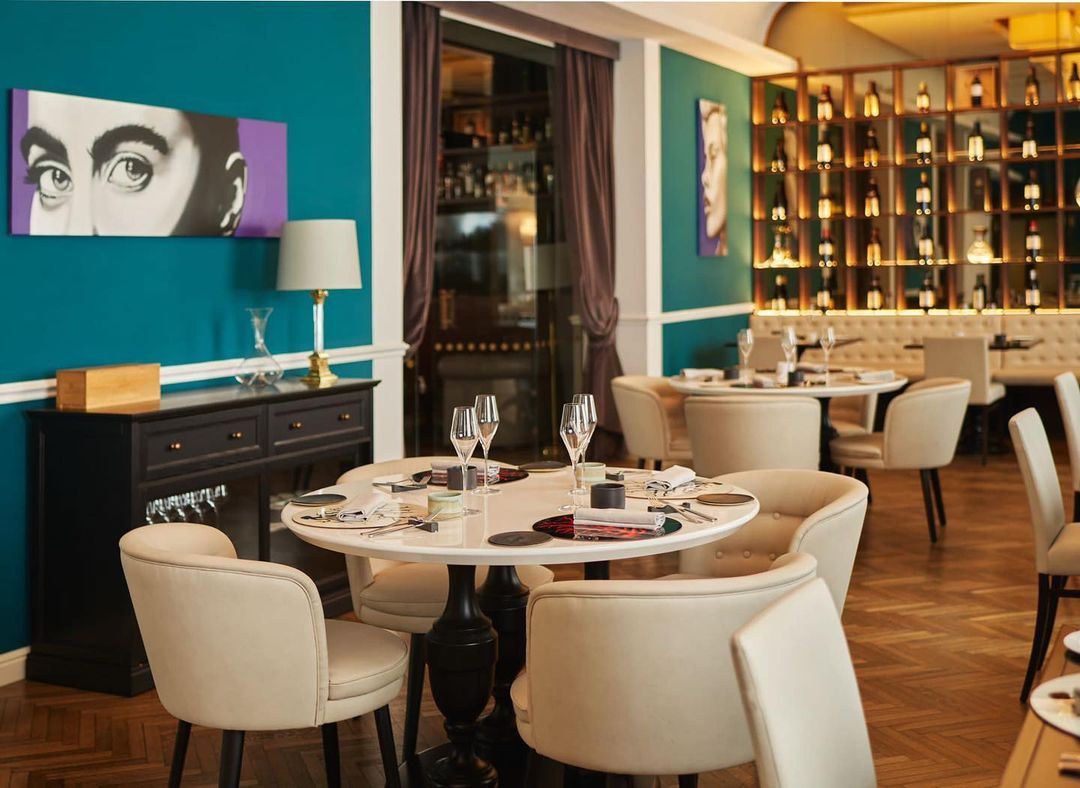 Hot on the heels of gastro-aperitivo summer nights on the rooftop at Plaza Hotel Lucchesi (lungarno della Zecca Vecchia 38 / six-course tasting menu: 70 euro), formal but fun restaurant Ground is under the creative management of chef Simone Cipriani (Essenziale, which recently reopened in piazza del Cestello). A slash of The Clash got our evening started as the clever bartender shook up ‘London Calling’, a subtle gin-based fennel and liquorice concoction served beneath the pine cone chandelier that makes the historic hotel’s bar one of the most memorable in central Italy. At 20:30 on the dot, we strolled over to the teal-toned dining room lined with contemporary David prints. Tuscan chef Daniele Lambruschi (from Aulla, in Lunigiana, former sous chef at Essenziale) explains the trio of antipasti in the signature Essenziale style of breaking down the barriers between kitchen and restaurant, chef and diners. Awakening the senses to flavours, aromas and consistencies, the pumpkin mousse woos with a sweet swirl of passion fruit, the fried prawns with a dusting of dried raspberries, and the savoury depth of cauliflower and scallops. From a stripped-back wine list consisting of predominantly independent Italian wineries, we choose a Alto Adige Riesling (40 euro), which cuts through the blissful greasiness of the shrimp in roast chicken jus and skin, fried potatoes and pine nuts. It’s like Sunday lunch in distilled form, in our case, the night before. Next up is a take on street food: an eat-with-your-fingers crab taco with guacamole and ‘nduja mayonnaise. The blackberry risotto with aged vinegar and bergamot is opulence in a dish, while the sea urchin spaghetti swirl is a triumph in pepper-forward creaminess. The entertainment came to a close with all the best autumnal flavours: apple pie custard, salted caramel, peanut butter and cocoa crisps. The only drawback is the piped music and the near-silence of the patrons: cuisine this vibrant deserves a racket of The Clash variety. Should I stay or should I go? Given that the Lucchesi is a very decent four-star hotel and the restaurant is open to all, you might have to consider both. 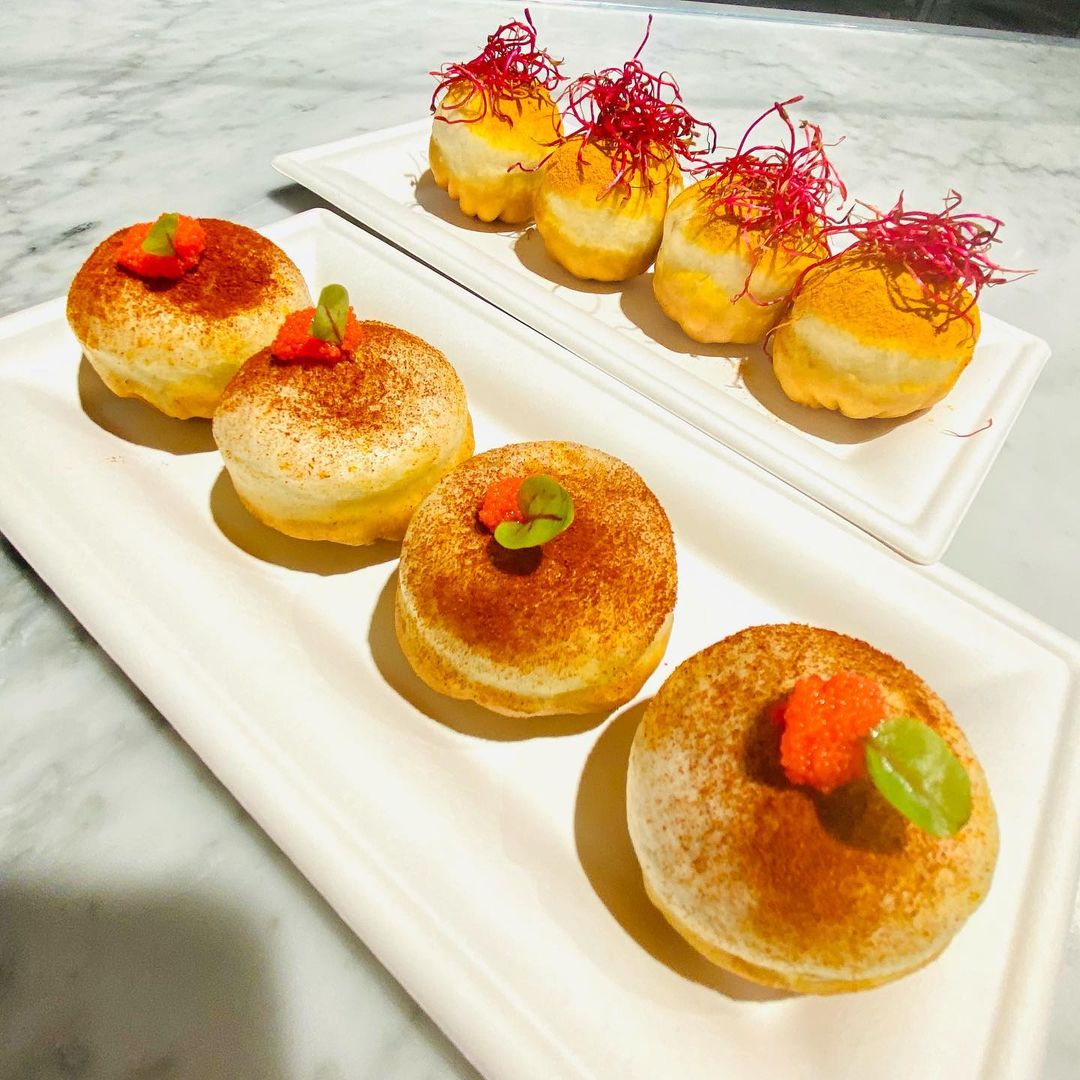 It’s a Monday night as Xin Ge Liu enthusiastically greets us outside her minuscule Il Gusto Dim Sum (viale Fratelli Rosselli 39R). The story behind the China-born owner’s move to Florence deserves a paragraph alone. After watching Under the Tuscan Sun in Shanghai, she decided to apply to Polimoda because “where else would you go to study fashion in Florence?” Serendipity took care of the rest: through the school, she met her husband, Lapo, and still studying, she lived above the former travel agency that now serves as kitchen and a five-seater eatery serving specific Shanghai fare: sheng jian bao. (“I’d seen the same place five times in piazza della Libertà, but it was destiny that we opened here.”) Xin Ge decides the abundantly generous order for us. First, a delicately flavoured Four Happiness Salad (5.80 euro), consisting of seitan, mushrooms, carrots and peanuts in soy sauce. Meanwhile, the three cooks in the kitchen right before our raised counter and comfortable enough stools (this is street food, after all, just executed at a higher calibre) set in motion, rolling dough, steaming baskets and pan-frying as orders arrive by phone amid beeping and sizzling. Soft on top and crispy beneath, sheng jian bao are the perfect cold-weather food, filling and comforting. The Three Treasures (12.80 euro for six) prove an immediate pick-me-up of soy noodles, garlic, scallops and prawns, while my dinner companion is still raving about the Lion’s Head Meatball (9.80 euro), whose crispy exterior contains pork meat and a hard-boiled egg that has marinated in tea. The Petit Voyage dim sum (12.80 euro for six) were a standout due to the light purple potato dough. Dainty and oh-so-Instagramable, I’m loath to attach the term dumplings to these refined bamboo and mushroom morsels served with slivers of black truffle. Equally impressive are the silky and slightly sticky Taro Lime (12.80 euro for four), whose bright green appearance conjures up a dessert. In fact, Xin Ge was inspired to design these bites after seeing cakes lined up in a Parisian patisserie; they’re actually filled with turbot, fish tofu and prawns. Epitomizing why we eat out, Blooming (16.80 euro) is beautiful to behold, a squid ink capsule carefully designed with swordfish, celery (“in Chinese cuisine, we use celery to heighten the flavours of fish”) and mascarpone, plus cabbage, mussels and fish roe. Plans are in the pipeline to expand in 2022, which seems suitable, given the owner’s drive and creativity. In the meantime, phone in your order and delight at this earnest and elegant Shanghai bao that embrace the best of Tuscan produce. 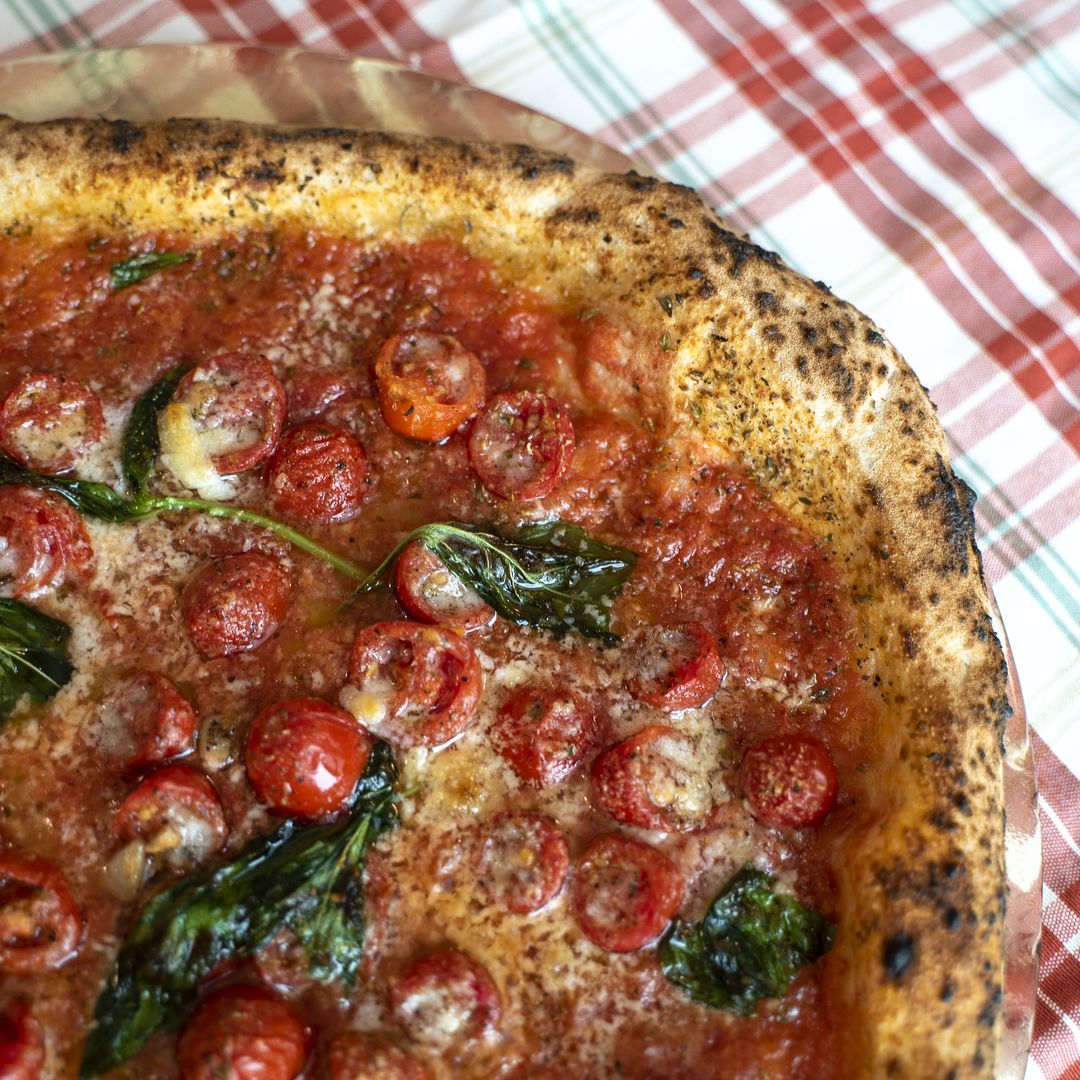 Your spatial awareness is put to the test at Pizzeria Starita (via San Gallo 2R) as light-as-air dough transports diners to Naples. Never have a cohort of Florentine journalists been so enamoured to attend a press lunch than at the latest in the quintet of pizza restaurants by Antonio Starita after the Materdei neighbourhood of Naples, New York, Turin and Milan. Passed down from generation to generation, the 79-year-old is showing no signs of slowing up, from his vice-presidency of Associazione Pizzaiuoli Napoletani to this latest outlet in Florence. “00 flour and craftsmanship, that’s what Neapolitan pizza is all about,” replies Don Antonio when asked about the flour he uses. “It’s just a blend I like. It changes with the seasons.” Although there’s nothing glamorous about the bare brick walls, our eyes are glued on the red glitzy pizza oven emblazoned with the signature “S”, all the senses are delighted by the delicacy of the dough and concentrated flavours. From the light and crunchy ricotta-filled courgette flowers to the moorish pasta patties, the fried morsels are a requirement here, devoid of residual oil and served steaming from the kitchen. We stare in awe as the Corno di Maradona appears on the table, a huge fried loop stuffed to the gills with ricotta and pork bits. And after all that, it’s time for pizza and room is somehow found for the Marinara Starita, a mood-enhancing taste sensation of tomatoes, pecorino romano and oregano. Equally showstopping is the Montanara, a fried pizza topped with an almost meaty tomato sauce and smoked provola. A quick return to the wood-fired oven yields a dry, crisp finish. Starita is a much welcome addition to Florence’s pizza scene. 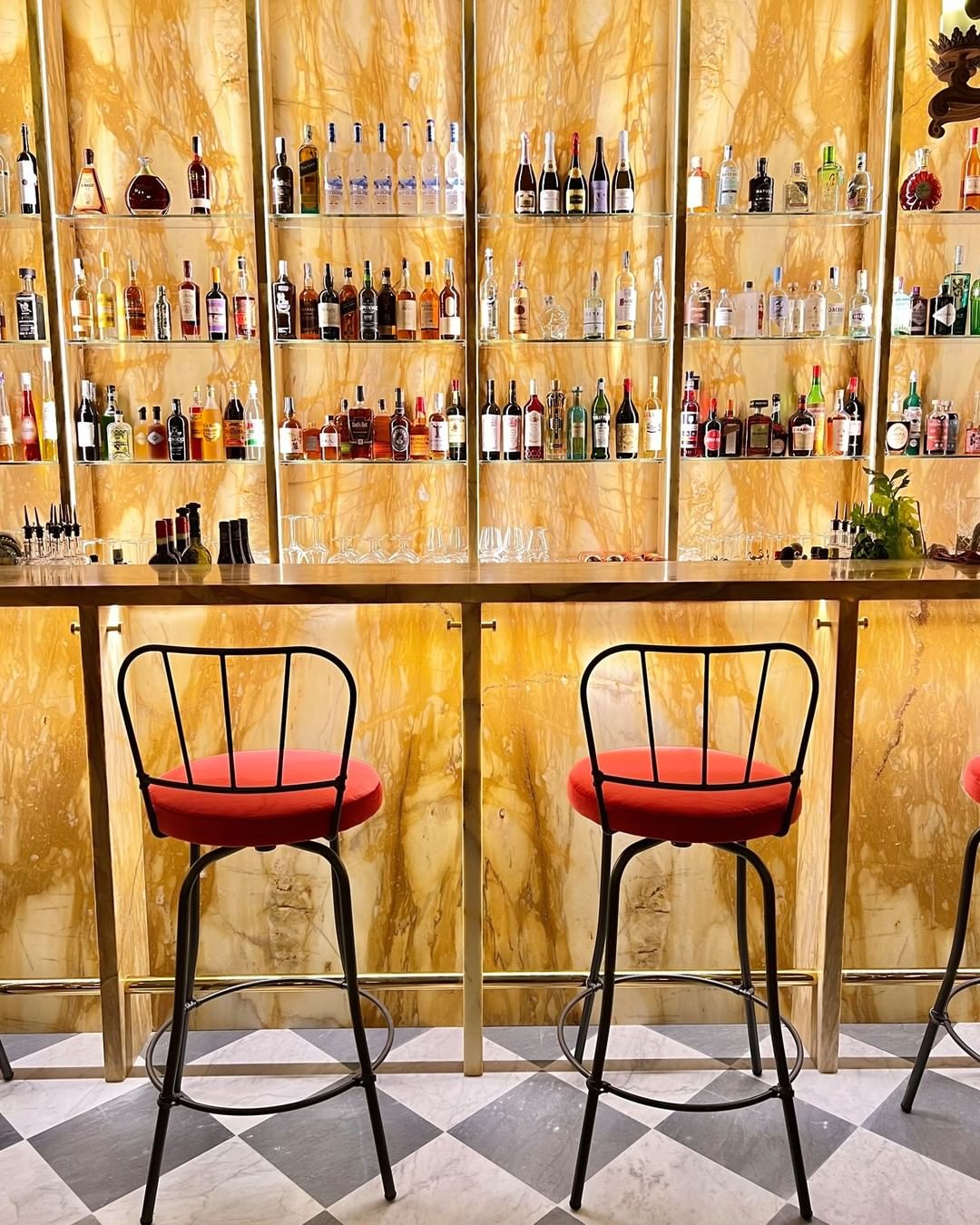 All-women-owned Bolgheri winery Donne Fittipaldi recently held a preview lunch at historic five-star luxury hotel Helvetia & Bristol to celebrate their latest label, Bolgheri Rosso Magnetico 2019, a beguiling 100% Cabernet Franc that wins you over with a leafy freshness that sets the taste buds quivering. To be honest, many of us had seized the opportunity to find out more about the just-opened curious Cibrèo Caffè and Cibrèo Ristorante addition at historic five-star luxury hotel Helvetia & Bristol operated by the Florentine hospitality brand, Starhotels. At the Caffè in the hotel’s blue lobby, tasting dishes of perfectly cooked tripe, pickles and earthy cream of porcini soup reveal much of the same as what goes down at the famed Picchi establishment ten minutes across town in Sant’Ambrogio: tempting, exquisitely balanced fare that has remained unchanged since 1979. As a concession to the hotel, club sandwiches and a Tuscan-style couscous also appear on the menu. Around the corner, in via dei Vecchietti, the new Cibrèo Ristorante steals the show with its stylish long marble bar as classic dishes like Florentine crepes and Fassone fillet are savoured by Florentine connoisseurs and international travellers alike. Florence now has Cibrèo squared (the hotel prices appear to be higher, as one would expect). Take your pick. 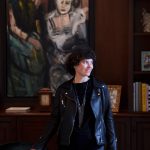 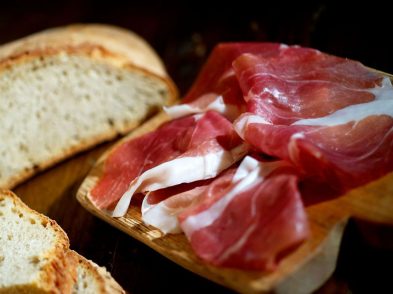